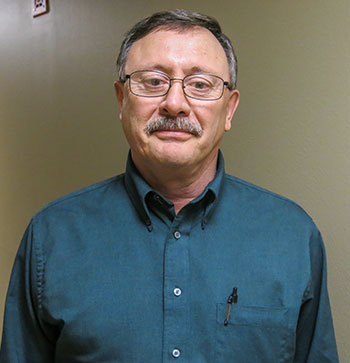 Greg Fisher, new Director of Cheyenne River Indian Outreach, has worked as a chemical dependency counselor on the Cheyenne River Reservation since 1993.

With the exception of his college years, Greg Fisher has lived his entire life in Faith, South Dakota. Just 53 miles west of Eagle Butte, the town borders the Cheyenne River Indian Reservation.

College took Greg to Brookings, South Dakota, where he earned a Bachelor of Science Degree in Sociology and, through an exchange program with the University of South Dakota, obtained a certificate in the field of Criminal Justice. Greg is a Licensed Addiction Counselor (LAC) through the State of South Dakota.

In 1993, Greg returned home to Faith and the Cheyenne River Reservation, working for the South Dakota Department of Social Services as a Child Protection worker. After five years with the Department of Social Services, he began his work with Three Rivers Mental Health and Chemical Dependency Center. The not-for-profit Community Health Center located in Lemmon, South Dakota, has one of its branch offices in Eagle Butte.

In 1998, while employed with Three Rivers, Greg’s services were specific to providing chemical dependency counseling to the seven counties in northwestern South Dakota, working primarily with the Native American population on the Cheyenne River Reservation.

In 2004 he became the Chemical Dependency Program Director for Three Rivers while continuing his front line service in the field of chemical dependency counseling.

Greg’s 22 years working on the Cheyenne River Reservation — 17 of those working firsthand with addiction — have provided him with in-depth knowledge of the damage substance abuse has caused and continues to cause to the individual, the family and communities on the reservation.

“I believe in the Mission of the Sacred Heart Center,” said Greg. “To eradicate violence and oppressive practices through the empowerment of individuals, families and communities in order to support justice, social change and non-violence — it was in this belief that I sought the position of Executive Director of Cheyenne River Indian Outreach. I look forward to working for the organization, with this team, to fulfill this mission.”

Greg and his wife, Ann, have five children and 21 grandchildren.