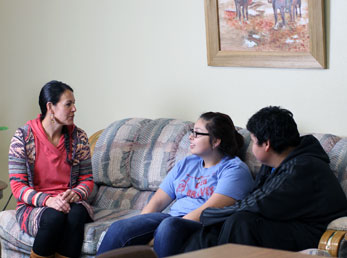 What is PTSD? Post-traumatic stress disorder (PTSD) is a mental health condition triggered by a terrifying event — either your own experience or witnessing someone else’s experience. Symptoms may include flashbacks, nightmares and severe anxiety, as well as uncontrollable thoughts about the event. Symptoms must persist longer than one month to be considered PTSD.

“PTSD is an underlying issue that can stem from any traumatic situation,” said LeNae, Outreach Coordinator for Cheyenne River Indian Outreach. “Whether from a domestic abuse situation, sexual assault or a bullying situation from your childhood, such events can impact survivors months and even years later.”

What causes PTSD?
Any kind of trauma can lead to PTSD, but common causes include:

“There are certain things that trigger memories in all of us,” said LeNae. “Our goal in sharing this presentation with community members is to give people helpful information on how to recognize PTSD and where to find help if they or someone they love is suffering from it.”

Signs — Symptoms
Symptoms usually begin within three months of the traumatic incident, however may begin years afterwards. Recovery times vary, though the condition may become chronic in some patients. Symptoms to look for include:

PTSD can also effect cognition and mood. Survivors may have trouble remembering details about the traumatic event. They can often have increased negative thoughts and feel guilty. In children, symptoms differ slightly and can include bed wetting after learning to use the toilet, sudden difficulty talking or acting out the scary event during playtime.

“One adult survivor described PTSD as ‘being STUCK’,” said Breeanne, Outreach Specialist for Cheyenne River Indian Outreach. “Survivors are stuck in the moment of horror, unable to move past it. The feeling is very much like being trapped in a nightmare, unable to wake up; or like a computer that’s ‘frozen’ and incapable of functioning.”

Left undiagnosed and untreated, PTSD can cause short-term memory loss, depression and can also have chronic psychological repercussions. For example, people with PTSD are more likely to have drinking problems. Fortunately, psychotherapeutic intervention and treatment can alleviate and often eliminate some of these effects.

How can PTSD be managed?
Fortunately, there are solutions. Some basic steps include: