Say NO to Meth! 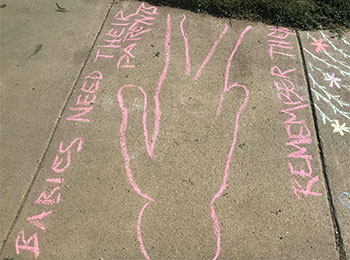 Cheyenne River Indian Outreach took advantage of the summer weather and the annual Watermelon Feed at Bear Necessities Thrift Store to host a sidewalk art contest! After enjoying some watermelon, many youth took the time to share a message about meth and drug awareness.

“We understand a lot of kids have addicts in their families — brothers, sisters, aunties or even parents,” said Bree, Outreach Coordinator. “We wanted to give them this opportunity to share their message to anyone struggling with addiction in our community.”

Methamphetamine is a stimulant drug usually used as a white, bitter-tasting powder or pill. Crystal methamphetamine is a form of the drug that looks like glass fragments or shiny, bluish-white rocks. It is chemically similar to amphetamine, which is a drug used to treat attention-deficit hyperactivity disorder (ADHD) and narcolepsy, a sleep disorder.

Other common names for methamphetamine include chalk, crank, crystal, ice, meth and speed.

Methamphetamine is most commonly used by inhaling or smoking, swallowing a pill, snorting or injecting.

How does methamphetamine affect the brain and body?

Methamphetamine increases the amount of the natural chemical dopamine in the brain. Dopamine is involved in body movement, motivation, and reinforcement of rewarding behaviors. The drug’s ability to rapidly release high levels of dopamine in reward areas of the brain strongly reinforces drug-taking behavior, making the user want to repeat the experience.

Because the “high” from the drug both starts and fades quickly, people often take repeated doses in a “binge and crash” pattern. In some cases, people take methamphetamine in a form of binging known as a “run,” going without food or sleep while continuing to take the drug every few hours. Runs can last for several days, taking a severe toll on the body.

Pilamaya — thank you — for helping Cheyenne River Indian Outreach raise awareness and help kids learn to say no to drugs!