Reaching Those in Need

After receiving her GED in 1996, Robin worked part-time at the Dollar Store and the local mini-mart while she took an EMT course. After passing the necessary classes, she was promoted to dispatcher within the month. “One of my true passions is dispatching,” she said. “I was the first to respond — there before the doctors, nurses, etc.” 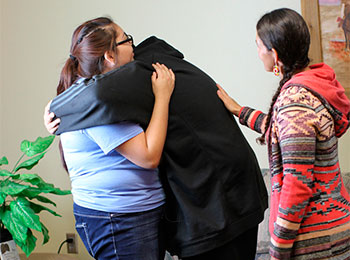 “Hopefully, we have laid the foundation for victims of violence to continue to be able to find themselves again, and reclaim the life they have lost.” ~ Robin, Advocate

It did not take long and Robin was driving the ambulance. After three years as an EMT, Robin became a police dispatcher and soon a police officer. “My boss groomed me to be more than an ordinary police officer, so in 2004, I attended the paramilitary training at the US Indian Police Academy in Artesia, New Mexico. The single mom endured the rigorous training, shedding 60 pounds. Armed with extraordinary training, Robin returned to the Cheyenne River Indian Reservation with her two-year-old to serve her people. “I chose a district out in the country, by myself.”

In 2008, Robin switched gears and went to work for the tribal chairman as his direct assistant. She managed 90 departments and over 500 employees. This experience inspired her to become a Tribal Council Member. She served her tribal council from 2010–2014. “We got to do some amazing things while on the council.”

Robin tapped into the power of the reservation’s youth. She took groups of teens and elders to a World Peace and Prayer event in Wyoming and participated in the Cowboy Indian Alliance in Washington, D.C. “I picked kids who would never have the chance to leave this reservation,” she smiles. “I loved seeing their eyes light up.”

Her leadership on the council also inspired changes in several laws including those pertaining to sexual assault and anti-bullying. While Robin enjoyed her tenure on the council, she felt that she needed a place to make a difference, so she become an Outreach Coordinator for the Sacred Heart Center. She chose the Sacred Heart Center as an option for a personal reason: “When I was police dispatching, I really got involved in Scared Heart. A co-worker raped me; he was a police officer. I became a victim myself.”

Robin started in January 2015 and has been going strong ever since. “We met our year’s objectives with a few months. In her position at the Sacred Heart Center, Robin and her fellow advocate, Jerri, work to educate those on the reservation about issues tribal member face and the resources available to them via SHC. “I love Sacred Heart — it is understanding of the personal needs. Sacred Heart is a company that looks out for family values.”

Each month Robin and Jerri seek to educate the communities on a variety of topics including Healthy Relationships, Sexual Abuse and Elder Abuse; they travel to 21 communities on the Cheyenne River Indian Reservation. Their territory encompasses two counties, which combined are roughly the size of the state of Connecticut! However, the population is remote — consider that on this reservation roughly 9,000 tribal members reside on the 2.8 million acres of land — making outreach vital. “A lot of the reservation communities do not have access to basic needs. Distance is a factor: Blackfoot community is 90 miles northeast of the Sacred Heart Center while Bridger is 65 miles southwest. Not only do the residents need goods but also education. “I feel like a hamster running in circles — until we find new ways to get our people out of poverty…” Robin shakes her head and continues, “This job is rewarding. If I am not out in the public, I am here working with women and seeking ways to reach communities.”

In one community, Robin and Jerri set up a canopy, prepared plates with hot dogs and watermelon. Their goal was disseminate information on “Healthy Relationships.” Some young men were working on a roof nearby their setup. They approached the advocates and asked about the meal. Robin explained, “You can have a plate if you take 10 minutes to listen to our presentation on healthy relationships.” Needless to say, Robin and Jerri shared their information to the hungry workers who received more than just a meal.

The outreach team also turns to social media to put the word out to community members. “On this particular day — I put on Facebook: ‘Tonight, we have a women’s support meeting.’ A grandma came. We were working on ‘Fear.’ She told us that she was scared — she locked herself in her room or the bathroom when her sons come home on meth. They had taken her whole world. She came twice to support group — each time in tears.”

Robin filed an incident report. Sometime later, she ran into the grandma in the grocery store, and she told Robin that she now had a caregiver and restraining order. She told Robin, “I feel like living again!”

Sacred Heart advocates know their work makes a difference in the lives of those whom they touch. Robin wants to “get these ladies to be strong enough to go out on their own,” but many are “prisoners of their own mindsets.”

Recently, Robin accepted a new position at the Sacred Heart Center as Sexual Assault Coordinator/Advocate, but she hopes to continue working directly with future Outreach Coordinators. “Hopefully, we have laid the foundation for victims of violence to continue to be able to find themselves again, and reclaim the life they have lost.”